Ubiquitous Connectivity One Step Closer Thanks to 5G RuralDorset

After three awards and two world-firsts, one could be forgiven for assuming the 5G RuralDorset project had peaked. The ground-breaking DCMS (Department for Digital, Culture, Media and Sport) and Dorset Council backed initiative has had a fruitful year showing how 5G can make Dorset a better place to live, work and visit. 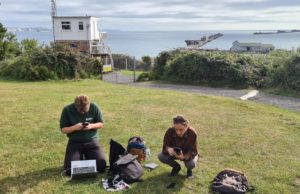 But the seemingly unstoppable team have gone a step further, achieving a UK first by successfully demonstrating Neutral Hosting over 5G with unique cores. This advanced 5G concept has the potential to transform rural and coastal regions. It does so by enabling connectivity in areas where Mobile Network Operators have traditionally been unable to afford to operate.

In technical terms, a Neutral Host is a third-party cellular network or Radio Access Network that allows multiple Mobile Network Operators to share their infrastructure. Instead of each network provider having to build their own cell tower to provide coverage, several network operators can purchase a lease or rent a slice of the network (a key feature of 5G) from the same Neutral Host. The network operators save on infrastructure costs, speed up their deployment, and are given commercial opportunities that were previously inaccessible. This equates to more capital to spend on improving the service, which ultimately benefits the end-users.

But what this translates into is improved connectivity for emergency services, businesses, and individuals. Public safety gets a boost, companies and farms are more productive, and those who have been unable to work and study from home now have the connection to do so.

And there are environmental benefits, too. Fewer masts mean less electricity, and less of a disturbance to the natural habitat. In an area of outstanding natural beauty, such as the Dorset Coast, Neutral Hosts can improve communities without sacrificing the landscape and ecosystems.

Poor network coverage may therefore be a thing of the past thanks to contributions to the research by the Satellite Applications Catapult, Wessex Internet, and Neutral Networks. The trials, which began in September 2021, will continue until March 2022 using the 5G Standalone trial network along the Dorset Coastline.

5G connectivity, for the project and trial, is provided by the Satellite Applications Catapult’s 5G Centre in Westcott. Marilena Kalitsounaki, 5G Network Systems Engineer at the Catapult said: “The innovative nature of the 5GRuralDorset project is further enhanced by the Neutral Host deployment over 5G. The concept, which was successfully demonstrated during the trials, is expected to further boost the connectivity along the coast, and in other remote rural areas, as reduced costs and increased flexibility for mobile operators and other interested parties will motivate the adoption of the Neutral Host model around the UK.”

Wessex Internet deployed their on-premises 5G network for the trial. Digby Sowerby, Project Manager at Wessex Internet said: “As an independent rural broadband provider we are always looking at how we can work with others to bring greater connectivity to rural communities and industries. We are very pleased to be working with Satellite Applications Catapult and Neutral Networks in these trials. Neutral hosting is a new way in which small, rural providers could work with others to ensure no community is left behind. We are very excited to see what might develop from this opportunity.”

Cllr Jill Haynes, portfolio holder for Corporate Development and Transformation at Dorset Council said: “Successfully demonstrating Neutral Host has wide reaching benefits for rural communities like Dorset who have traditionally been left behind, often experiencing low or no connectivity. Poor connectivity has dramatic social, economic and safety impacts, and we hope that this research will help pave the way to closing the digital divide between rural and urban areas and truly transform people’s lives.”